Yeah, OK, it may be weird to have one favourite funeral... let alone five! But, you, have to remember that we are absolutely obsessed with changing the face of funerals in the UK. We are determined to break the mould of cookie-cutter-production-line-one-in-one-out services and work towards a time when each funeral we conduct is as individual and unique as the person who has died.

1. Cobblers to the world!

Terry de Havilland's designer shoes strutted and stomped and shimmied across catwalks from London to New York to Paris - he was a legend in the design world and legend in life. Tall, handsome, funny, warm and fearless he needed a send-off as big, bold and badass as he was. Kate T had the absolute privilege to work with Terry's wife, Liz, to plan the perfect send-off. No dreary crematorium for Terry - his funeral was representative of him - the venue was a seedy bar, the hearse was leopard-skin printed, the coffin was brilliantly painted with pop-art-style 'whams' and 'pows', there was loads of music, a video showcasing his life and his shoes, a video message from his son in Australia, and the booze was as free-flowing as the tears. The next day Liz and Terry's other son and his family had a quiet, family-only, committal at the crematorium - giving them time to reflect and say their personal goodbyes. 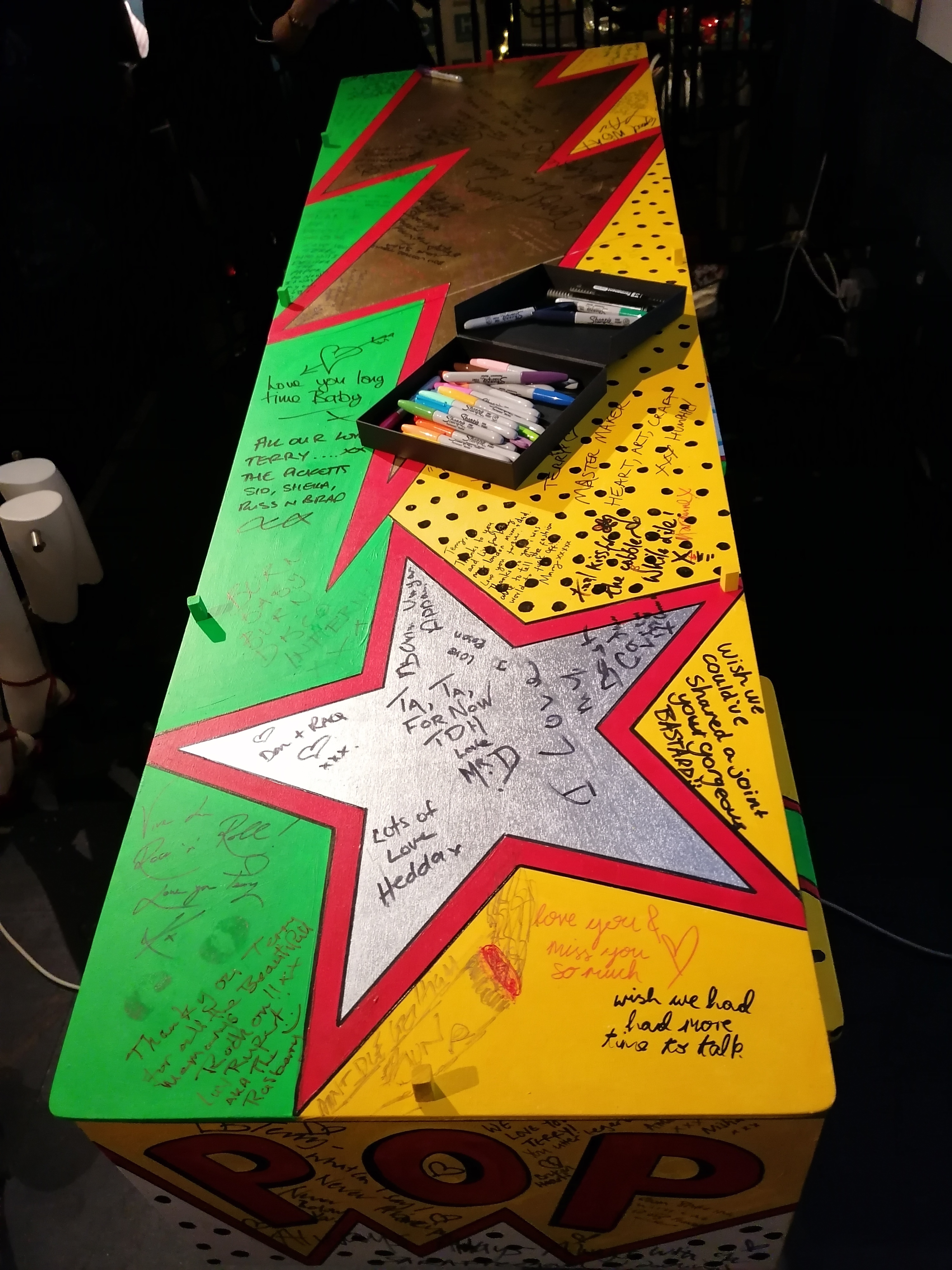 Dave Hibbert was an atheist who loathed funerals and was of the 'I won't be there so I don't care' school of thought when it came to his own final farewell. Fortunately, his daughters are an amazingly creative pair and they decided to give him a send-off like no other. Dave's 'funeral' took the form of a guided walk around a field, led by Kate T. There were various stopping points where stakes had been hammered into the ground and, attached to the stakes, were posters describing a portion of Dave's life. From the field, there was then a visit to Dave's garden, just over the road, which contained some of his wonderful flights of fancy like his 'bike' shed and his 'tea' tree. The tour ended back at the village hall where Dave's coffin (decorated Jackson Pollock style by his daughters) was resting on the front fork of forklift, ready to be raised above us all. A toast was made and Dave was lowered and went on his way in the back of a Land Rover hearse. Again the family went with him to the crematorium the next day to quietly say their personal goodbyes. 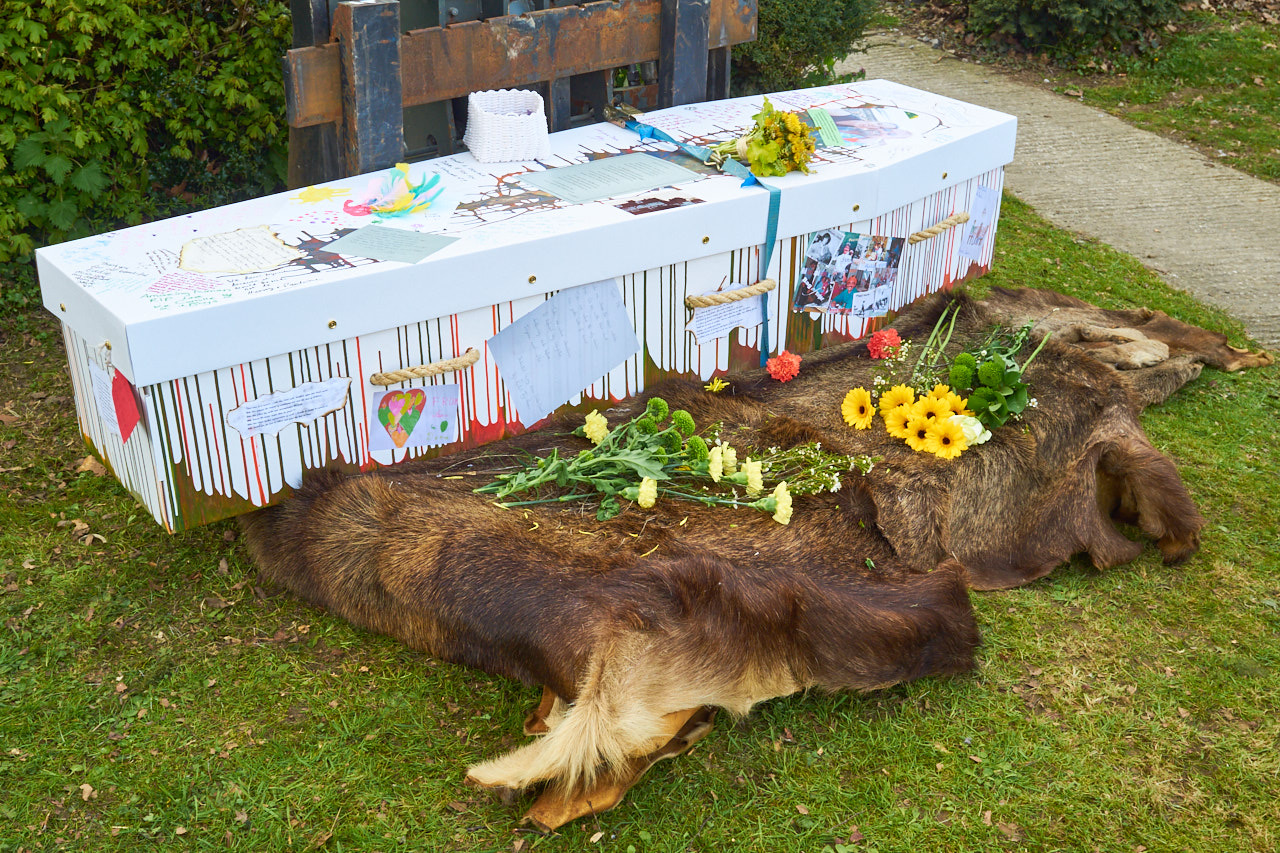 A had come to Coffin Club (the organisation that we run around funeral choices) and wanted to know if he could be buried in the field behind his house. We said 'Yes, of course you can!' and set about telling him how he should go about organising such a thing (checking with the environment agency, getting a note put in the deeds of the house). A's family decorated his coffin with maps of all the places he had been and tickets and fliers from the gigs and festivals he loved to attend and it looked absolutely wonderful. The ceremony was in the village hall, beside the house and field, and, with the coffin in situ first, guests were happy to gather around it, look at all the memorabilia on it, and have a little chat with A. After the service - which had loads of brilliant music in it - A was drummed across to his final resting place, where his family were the ones to lower him into the ground. It was then back to the village hall for curry and cake and, actually, much laughter as stories were swapped and tall tales told. One of the songs played in A's funeral was Lou Reed's Perfect Day... and, it really was.

When Tonita rang Kate and Kate, she was standing outside the hospital where her husband lay dying. She had come to a talk K and K had given and, at the time, she had no idea she would need their services so soon. She knew she didn't want a 'conventional funeral for her husband but she had no idea what she wanted. In the end, after talking through all her options with the Kates she decided to do things back to front and she had a family-only committal with just her two boys and their families and then, a couple of weeks later, once she'd had time to adjust, she had a big celebration of life in a local arts-centre in a de-consecrated church in Lewes. There were pictures of Moff through all the various stages of his life and each of his sons did a beautiful tribute to their dad. Guests tributes were invited from the floor and many people felt moved to speak, off-the-cuff about Moff. His granddaughter made a beautiful tribute to her beloved granddad and there wasn't a dry eye in the house. A toast was made to a wonderful man and then the day flowed seamlessly into eating and chatting and reminiscing. Tonita says she looks back on the day fondly, which is surely a testament to how and what a funeral really should be.

5. If you go down to the woods today

M was young - just 57 years old. He was also someone with the sunniest disposition and positive outlook on life. His wife and daughter were his world, he loved heavy metal music and being out in his garden or rambling in nature really was his happy place. It really was fitting, therefore, to say goodbye to him in a setting that reflected that. The Kates suggested a local barn venue to M's daughter, which has a little woodland glade that can be set up for ceremonies. The banana leaf coffin looked beautiful nestled amongst the trees and with Whitesnake and AC/DC among the song choices, the two biggest loves of M's life were brought together. It wasn't a big or showy funeral, but it absolutely represented the person who had died. M had an unattended cremation the next day as that's what he and his family had decided would work best for them. 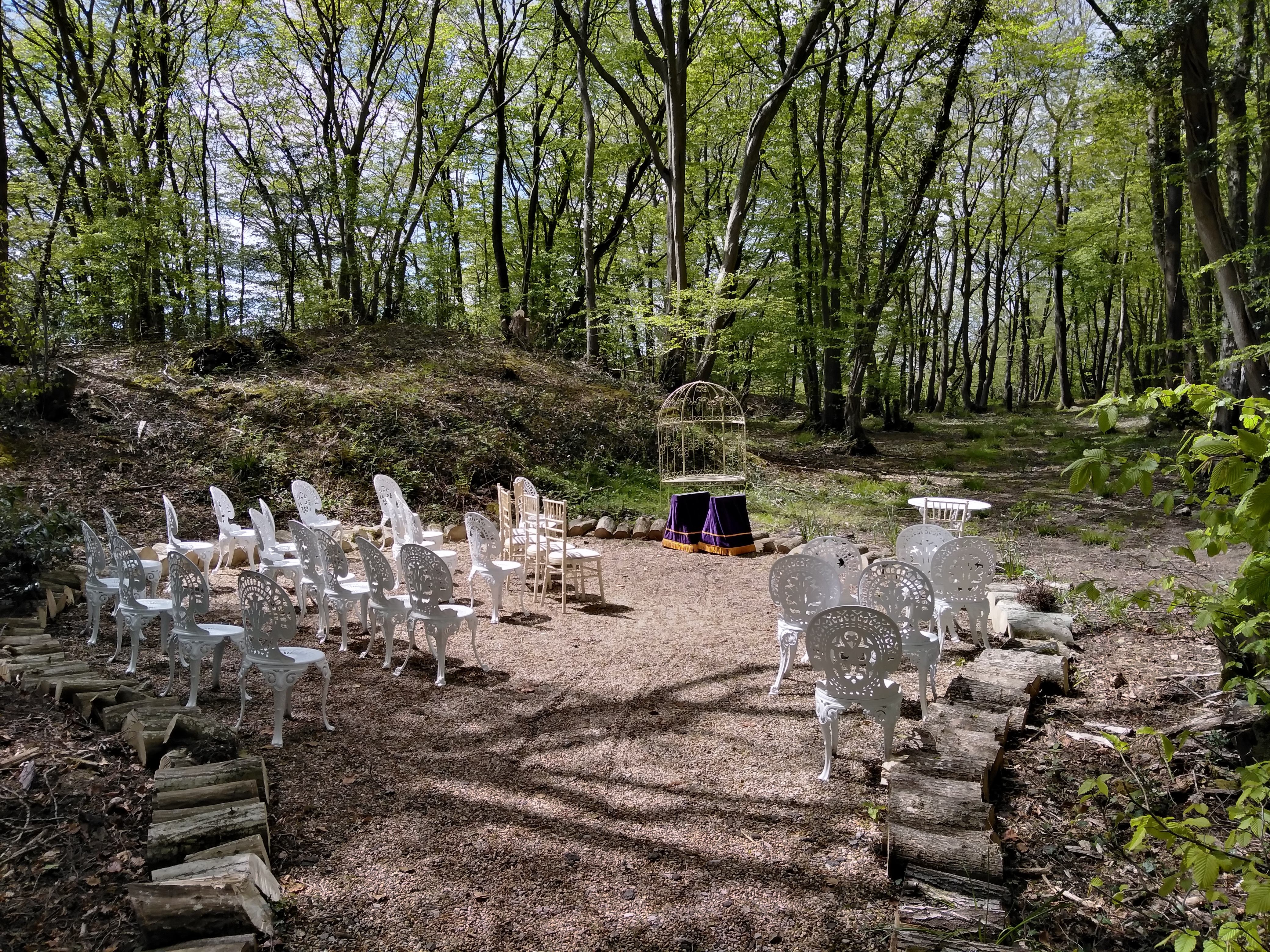 OK, I know we said 5, but we could literally go on all day! I just wanted to put a final funeral in because it took place at the crematorium and, for many people, that is the perfect setting and it is the content, rather than the place, that makes the service special. P was a very high-ranking officer in the Metropolitan Police. She had a career spanning decades and was held in very high regard within the organisation. She had an escort of mounted police beside her horse - which was incredibly moving to watch. Her family had a booked a double slot, so there was plently of time to do justice to her long and impressive career, as well as to her life outside of and beyond the police force. The ceremony was conventional by any standards, but the room was jam-packed and the feeling of love was palpable. But, what made this ceremony special was the fact that P had recorded her biography through the charity The Hospice Biographers and when her voice played out, talking about her life, it was absolutely breathtaking. The reaction was visceral - you could see people take a sharp intact of breath - then, after a moment of adjustment, they relaxed into hearing her, she was there with them in the room and it was an incredibly special and moving thing to witness. It really doesn't matter where you are... when it's good - it's good.